The Romans realized Budapest’s strategic geographical location. They conquered the Western part of present Hungary (Transdanubia) in the first decades BC. 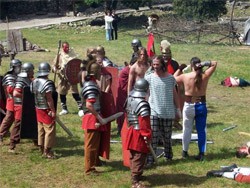 The Roman troops occupied the Celtic settlement they found here and named the place Aquincum.

The name means “abundant in water” and proves that the Romans discovered Buda’s natural treasure, the thermal waters.

They have already developed sophisticated bathing culture at home so they built bathhouses to practice it far from Rome.

Aquincum’s military camp was near Árpád Bridge, the civilian town was in the northern part of present Budapest. You can see remains of Aquincum today in Óbuda.

The Romans ruled Transdanubia for 4 centuries; they built fortresses along the Danube’s west bank. Aquincum’s population numbered about 50,000 people during heyday.

As the Roman Empire declined, barbaric tribes attacked from the east more often. In the early 5th century Rome evacuated and left behind Aquincum.