Date is Not Official Yet!

Footwear in the Focus

Visit the Festival of Folk Arts in Budapest’s Castle District between 17th and 20th August/Saturday-Tuesday if you want to find out more about Hungary’s and other nations’ rich folklore and crafts straight from the horse’s mouth. 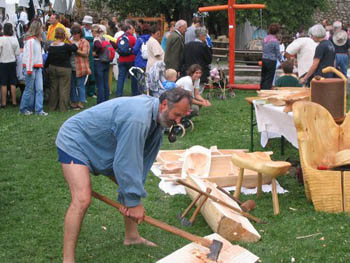 Organised for the 33th time, the Festival is the most significant forum for living folk culture in Hungary.

The most renowned local artists and craftsmen from different regions of the country will introduce their skills handed down from many generations.

This year Japan will also present its rich folk heritage and crafts.

Things to Do & See on the Festival

Besides the folk traditions of the guest countries, the festival will be focusing on footwear, mainly the Szeged slippers that are living their revival nowadays.

A whole exhibit and workshops will be dedicated to this theme in the Oroszlános Udvar. Each year the festival invites several nations as special guests of the event.

Shoemakers from Spain and Turkey will be present to show their renewed designs.

You can also meet the best shoemaker of the world and see how he makes his extravagant footwears from any kind of animal skin:

You will have the opportunity to try out shoemaking in the festival’s similar to original traditional shomaker’s workshop.

Guest of Honor country of the 2019 festival:

In the workshops you can try and learn the authentic folk crafts:

If you’d like to take home traditional Hungarian souvenirs, the fair at the festival is a good place to buy them.

TIP: the Festival is connected to the festivities of the August 20th St. Stephen’s Day-National Holiday when Hungary celebrates its first king, St. Stephen, and the foundation of the Hungarian state.

The event closes with an amazing Fireworks Show over the Danube that you can watch from the upper deck of a cruise boat.

The termini of the buses is at Dísz tér, at the gate to the Royla Palace.

Note: Payment both cash and bank cards are accepted. 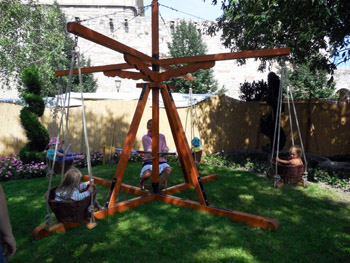 Footwear and shoemaking are the highlighted themes of the festival this year.

Besides Japan as Guest of Honour, visitors can meet craftsmen and folk artists and see their remarkable works from:

On top of the workshops and fair, there are many other programs to entertain you.

Artists from all around the world perform folk dances and folk music. 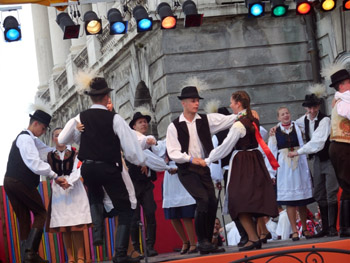 will entertain visitors each day on two stages: on the Palace Stage next to the Savoyai Terrace and a stage in the Lion’s Court (Oroszlános Udvar).

The Opening Ceremony of the Festival will be on Friday, 17. August at 18.30 on the stage at Oroszlános Udvar. 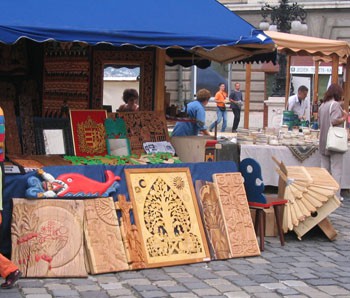 Folk artists from all over Hungary present their craft goods that make an excellent souvenir:

The usual fair-fare can be tasted on all 4 days:

You can also sample traditional food of the Hungarian countryside 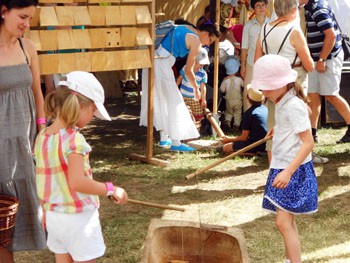 Children won’t be bored either, there’ll be plenty programs for them, as well every day from 10.00 till 20.00.

In the play house at the Savoy terrace kids can try their hands at various handicrafts:

Toddlers can play with memory games, skill board games, wooden toys and enjoy a merry-go-round in the New World Garden (Újvilág Kert) next to the National Széchenyi Library.

Tekergő Square – In the Garden of the Budapest History Museum

Rambling sail, Flipper, Labyrinth, Catch me if you can!, Air Soccer, Fun Bowling

During the four days of the festival children will be able to try the following crafts in the garden of the history museum.

Kids can learn to play traditional Hungarian skill games with the Baranta Association.

A baby playground await the littlest ones where they can sing together lead by Alice Környei.

On 20th August we also celebrate the end of crop harvest and the new bread and the ceremony of the so called “blessing of the bread” will take place at the stage at the St. Stephen Statue next to Matthias Church following a spectacular harvest process.

Travel back in time with the Festival of Folk Arts: come and experience the atmosphere of old fairs held in the Castle, and have a wonderful time with your family during your Budapest vacation!