The Főzdefesz Craft Beer Festival is a unique beer festival where you can see and taste what the top new-wave beer makers and street food bars have to offer:

The autumn festival is held around the first weekend of September 2017 in the City Park (Városliget), Napozórét/Great Meadow next to Petőfi Stadium the largest leisure park in the city near Heroes’ Square, (M1/yellow line).

Information About the 2016 Festival

The September event had been focusing on red beers.

Payment on the festival: with HelloPay card and paypass bank cards (no cash). 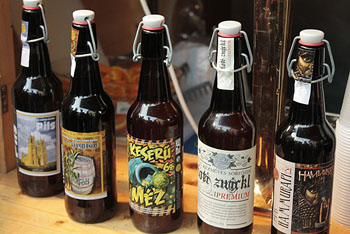 Each sample is 150 ml. At the end you can choose one to have a full pint for FREE.

The most popular participants of previous events will be present again along with new stars of Budapest’s street food scene.

TIP: The Gourmet Festival  (17-20. May 2018.) is also a great place to try local food. The cream-of-the-crop of restaurants from Budapest and other parts of Hungary will be present and offer a taste of their cuisine over the 4-day event in Millenáris Park, Buda.

You can sample more than 100 beers in 50 stalls made by the cream-of-the-crop artisan Hungarian breweries. Lighter ales and lagers are becoming more and more popular, while Indian Pale Ales are still well loved at any beer event.

The curiosity of the season will be the hopped ciders: you can compare two: the Fusion Cider of OK Brewery and The Infusion by Hopfanatic.

Other exciting beers you can sample at the festival:

Well-known craft breweries that are longtime participants of Főzdefeszt that will be in the City Park.

You can also sip brews made in Transylvania. The guerilla beer makers will surely bring some exciting beers too.

TIP: Don’t miss the Belgian Beer Festival in Budapest Whale/Bálna in mid-May: nearly 200 beers, 50 on tap. The Czech Beer Festival is held in June on the roof terrace of WestEnd in downtown.

See information on other beer festivals in Budapest.

See our Facebook Photo Album on the Street Food Show

Sights, Attractions Near the Venue


City Park – The city’s most spacious green area with lots of attractions for the whole family: the Budapest Zoo & Botanical Garden with the Holnemvolt Leisure park right next to it, and the Széchenyi Bath,

Opera House – an imposing building on Andrássy  Blvd. built in the second half of the 19. century.