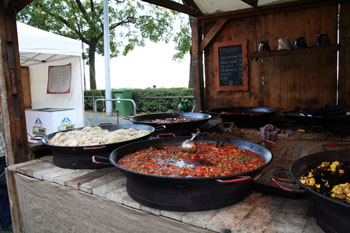 The event is in Buda, on the Upper Bank of the Danube between Várkert Bazaar and Döbrentei Square. 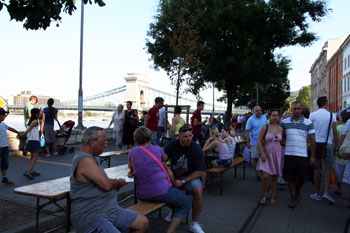 By walk only. No public transport due to the programs and the fireworks on 20. August. 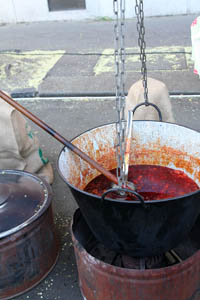 The festival is the biggest gastronomy event in Budapest – apart from the Christmas Fairs at Vörösmarty tér and the Basilica.

A perfect place to sample local food and drinks:

The location, Várkert Bazaar is one of the newest attractions of Budapest: a series of ornate, 19. century palace buildings with a lush garden.

It is home to

The view of the Danube and the landmarks lining the Pest bank is just amazing from here.

The Street of Hungarian Flavours has been part of the August 20th/St Stpehen’s day festivities for many years now.

The festival is also the venue where you can first taste Hungary’s Birthday Cake. Each year the guild of Hungarian Confectioners announces a contest to make a special cake from traditional local ingredients.

A jury then chooses one over 2 rounds and the winner torte is first sliced on the Street of Hungarian Flavours.

This year a rich raspberry torte made with 600 g of the fresh fruit per cake. Its name is Boldogasszony Csipkéje – it’s the folksy name for raspberry).

For those who watch their weight or avoid sugar in their diet can have a slice from the Sugar-free Cake named Little Chestnut– only 204 kcal and 14,9 g carbohydrate per slice.

Besides the Nation’s Cake you can also savour the wineers of the St. Stephen’s Day Bread Contest:

TIP: Browse also our other program recommendations in August!