Travel Back in Time with a Cup of Coffee

Let us introduce to you the cream of the crop of historic Budapest coffee houses! 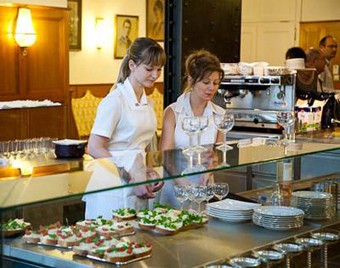 It became a sort of ritual to finish my walk in the city with a cup of freshly brewed coffee and a slice of yummy cake in one of the many classic coffee houses.

While sipping my coffee, I contemplate the fine interior and travel back in time to the beginning of the last century when Budapest was the city of cafes.

Although time and wars swept most of them away, several classic coffee houses have been restored in recent years trying to revive the dazzling coffee house life characteristic of the turn of the 19th-20th century.

TIP: See also our favourite, trendy cafes in Budapest as well as specialty cafes where you can explore the world of third-wave coffee supplied by micro and nano roasters from all over the world.

Coffee culture was thriving in Budapest from around the early 1910’s until the beginning of the 1930’s. In this era the around 500 cafés were scattered around the city.

They served as common meeting places of talented writers, poets and artists. Some of them spent most of the day in their favourite place, musing or writing at their regular tables.

Ink and paper were free for them and they could eat the “writer’s menu” (bread, cheese and cold cuts) at discount price.

Besides artists, ordinary people also popped in for a cup a coffee on Sunday afternoons.

Coffee houses were a home to vivid cultural life. If you’d wanted to know the latest news and gossip in town you would just have to sit in one of these grand cafés.

Most of them were destroyed during the world wars. The communist regime did not do good to them either.

The leaders of the communist party considered the cafés as a center of underground organizations, so to put an end to any conspiracy they closed the most popular coffee houses in Budapest.

In recent years many, once-impressive places have been restored to their original splendour and try to revive coffee culture.

Ruszwurm – the Oldest Cafe in Budapest

The pastries were so tasty that Elizabeth (Sissi), Austrian Empress and Queen of Hungary (1837-1898) sent couriers to get cakes for her breakfast.

The owner of the coffee house was imprisoned after the fall of the 1848/49 Revolution and War of Independence.

One of his cell mates, Rudolf Linzer inspired him to make the Linzer biscuit (two slices of shortcake glued together with apricot jam). 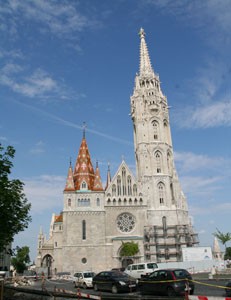 In summer Ruszwurm is usually crowded with tourists.

In late autumn or in winter you have better chances to get a table in the snug inner room.

The area has many historic sights and attractions.

The turreted spire of Matthias Church stands near the cafe on Szentháromság tér. Find out more about attractions in Buda Castle.

This fine coffee house opened on the ground floor of Church of St. Ann’s vicarage in the first half of 1970s.

The majority of the regulars consists of the middle-class residents of Buda.

Picturesque view of the Parliament  and the Danube from the terrace.

Standing in the heart of Budapest, Gerbeaud is usually filled with tourists no matter what time of the year you come.

It’s is one of the oldest and most famous cafés of Europe, operating since the middle of the 19th century .

The Gerbeaud exudes tradition and style.

Gerbeaud has three separate shops and a terrace facing Vörösmarty Square. The main shop opens from the square.

Do spare some time to walk through all the rooms and admire the varied decoration!

You’ll see the portrait of Emile Gerbeaud, the Swiss pastry chef who bought the place in 1884. He created the famous Hungarian bonbon, konyakosmeggy: sour-cherry soaked in cognac and covered with dark chocolate.

The first thing that pops in most Hungarian’s mind about Gerbeaud is not coffee but the delicious homemade cakes. Its flagship is the Gerbeaud cake: ground walnut and jam filling between layers of sponge covered with chocolate.

Other sweet delights to try from the Gerbeaud’s pastry counter:

The other thing I can’t resist is the Gerbeaud ice-cream, in summer they sell outside the café on Vörösmarty Square.

Out of the 500 coffee houses the New York Café was the most elegant and popular at the turn of the 20th century.

According the story, writer Ferenc Molnár wanted the café to stay open day and night so he threw its key into the Danube.

The tables in New York Café witnessed creation of many important pieces of Hungarian literature .

The New York Café, together with a luxury hotel, reopened in spring 2006 so you can see the place in its original splendour.

The hotel’s Salon restaurant is also worth checking out. It has a great wine list with a wide choice of Hungarian wines by the glass and a seasonally changing menu.

Find out more about the history of New York Palace Budapest.

As one of the grandest of all historic Budapest coffee houses, the Central was not only a place for drinking coffee and nibbling cakes but a meeting place for writers, poets, editors and artists.

The coffee house functioned as a focal point of urban social life where new ideas, notions were discussed and dispersed.

Many literary works were inspired and born here at the turn of the 19th-20th and in the first half of the 20th century.

The staff of the famous literary periodical, the Nyugat, were regulars here. They worked on the gallery, where the Central’s restaurant section operates today.

The Centrál reached its heydays between the two world wars with famous writers Frigyes Karinthy and Lőrinc Szabó among the regular guests.

The communists did not tolerated popular and unique places like the Centrál, so they shut the place down.

The grim times ended and the Centrál Café was the first classic coffee house that reopened after the fall of communist dictatorship in 1989.

The restored café managed to recapture the grand coffee house feeling of the late 19th and early 20th centuries.

Enjoy its excellent coffee specialties (like the Café Pepperino: espresso with chocolate and pepper), cakes and patisseries!

TIP: This is one of the few places that make and sell cronut in Budapest, if you fancy some sugar-loaded American treat.

The classic old Művész Cafe has been revamped in recent years. Cakes are great, though service is occasionally snooty.

Although the interior lost most of its original glory, its paintings, mirrors and statues still ooze that characteristic coffee house feeling.

In summer sit on the terrace and watch the world go by on Andrássy Avenue.

Of all historic Budapest coffee houses, Astoria managed to survive the wars and the communist regime without much damage.

Today it is operated by the Danubius Hotel Astoria.

Great fusion cuisine combining well the tastes of the East and West.

For breakfast you can have

Founded in 1890, the Hauer used to be one of the most prestigious coffee house and pastry shop in Budapest. 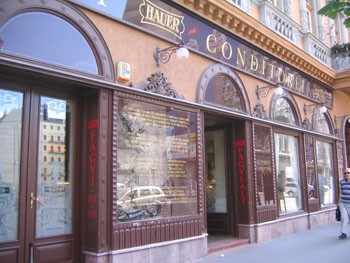 It flourished in the beginning of the 20th century with a new chocolate and bonbon workshop added to the existing shop.

It became the the property of the state (in 1949) during the communist era but it managed to preserve its old-world charm and cafe atmosphere right till the beginning of the 1990s.

The confectionery closed down in 1991, then reopened in 2002 but due to an accounting dispute, a liquidation process was launched in 2006 that still hasn’t come to an end.