Church of Our Lady in Budapest Castle

The slender main tower of Matthias Church in the heart Buda Castle can be seen from many parts of the city.

Not much remained of the original building due to numerous expansions, wars and reconstructions.

Opening hours may change because of religious ceremonies.

The church is usually open:

Note: Once a year, on Holy Saturday (the Saturday before Easter), the church can only be visited by worshippers.

see more on the official site of the church

To the church only:

The ticket is valid for visiting the Church and the Museum of Ecclesiastical Art (Egyházművészeti Múzeum) in the crypt.

Admission to the To the Bell Tower

Tours start at every hour, max 15 persons can go up.

English-language tours (duration: 45 minutes) can be arranged at the church during tourist opening hours:

The church kindly ask visitors to follow the below rules when visiting the church:

According to historians a church referred to as Church of Mary stood at the place of the current edifice that was founded by Szent István (Saint Stephen) the first king of Hungary in 1015.

There’s no archaeological evidence of this early church though.

The earliest remains of the church dates back to the 13th century when King Béla IV. (1206-1270) commissioned building of a church at Castle Hill after the 1241-42 Mongol invasion.

The oldest part of the building is the Mary Gate (Mária Kapu) at the south entrance was built by King Nagy Lajos (1326-1382) of the Angevin dynasty in the 14th century.

King Sigismund of Luxembourg (Luxemburgi Zsigmond: 1368-1437) enlarged the church. His wedding to Cillei Borbála was held in the church.

Read more about the early history of Buda and Pest at:

The name of the church refers to King Matthias Corvinus who expanded and embellished the building in Renaissance style.

He also added the southern high tower (60 m high) called Matthias bell tower that bears the Hunyadi-s coat of arms a raven holding a golden ring in its beak,

Matthias was a much revered ruler of the era and was one of the greatest kings of Hungary.

He was very fond of the arts and sciences and invited famous artists from abroad to help establish Renaissance enlightenment in Hungary.

His royal court was famous even in Western Europe and visitors often praised the magnificence of his royal palace.

Matthias was crowned to king of Hungary in the church and his two weddings (the first to Katherine of Podiebrad, the second to Beatrice of Aragon) were also held there.

Read more about King Matthias and his reign.

In 1541 the Turks occupied Buda and turned the Church of Our Lady into a mosque.

Many artifacts were taken away by them, the beautiful frescos were whitewashed, and ornate furnishings were destroyed and discarded.

By the end of the siege of Buda in 1686, not much survived the Ottoman years.

A new church was constructed of the remains in Baroque style.

In the early 18th century the church suffered more damages and it was finally restored in Neo-Gothic style by Frigyes Schulek in 1873-96.

The exterior and the frescos originate from this era and are the works of Hungary’s greatest artists of the time (Károly Lotz, Bertalan Székely, Mihály Zichy).

The marvellous stained glass windows on the south elevation are the finest examples of the talents of these artists.

Most Notable Features of Matthias Church

The oldest part of the church at the foot of the bell tower in an atrium dates from the 14th century.

This is the only real Gothic piece, others our reproductions by Frigyes Schulek. Parts of the gate include signature marks of craft unions of 14th century stone carvers.

The 5 floors are from the 13th-15th century while the top with jagged stone carvings, a balcony and balustrades are the work of Frigyes Schulek from the 19. century.

On the third floor of the tower, on the southwest side, there is a duplicate of the shield of King Matthias placed there in 1470.

The original is on display inside the church.

The church bells are hanging in the chamber behind the shield. Only three of them survived; the biggest one weighs 3.2 tons and can tolls at noon.

TIP: You can climb up to the lower terrace (at 47 m) of the Bell & Lookout Tower on 197 steps at and enjoy the fantastic panorama. The renovation of the tower was finished in 2015 and opened to the public on 21. October 2015. 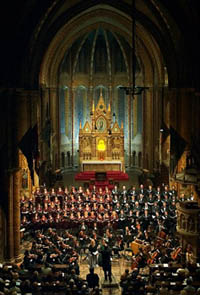 It received its name after King Béla IV., the founder of the original church.

Multicolored roof tiles cover the building some of which retained its original Gothic style.

The altar is in the middle of the main chancel and is the work of Schulek.

It is at the end of the northern aisle.

Fresco scenes by Károly Lotz depict the highlights of the life of King László (1077-95).

The chapel is next to the chancel and was built by Frigyes Schulek in neo-Gothic style.

The seven frescos of St. Stephen on the walls and twelve windows showing Hungarian saints are all masterpieces by Bertalan Székely.

Bottom of the Béla Tower

Awinged altar painted by Károly Lotz depicts the victory at Nándorfehérvár and the tradition of noon bell commemorating the event.

The royal staircase and oratory

There is an exhibit about the history of the Holy Crown.

A replica of the Holy Crown of Hungary and other coronation medals are also on display.

These objects may seem to be cheap copies, especially compared to detailed photos of the original crown, but they were made back in 1966, on the basis of photographs only, as the Crown was “held hostage” in America, and until its return in 1978, Hungarians could only went to see these copies as pilgrims.

It is next to the main entrance.

A Baroque statue of the Virgin Mary with Christ stands here, to which Buda’s miraculous recapture by the united Christian army in 1686 is attributed.

According to the legend, when the Turks put Buda castle under siege, people walled in the statue inside the niche.

The Turks didn’t find it.

In 1686 an explosion demolished the walls around the statue revealing the Virgin’s shining face. The Turks took this as a bad omen so they gave up this part of the castle without fight.

Szent Imre, son of King St. Stephen and heir to the throne, was killed by a wild boar at young age.

The altar of the side chapel shows scenes form his life.

The remains of the royal couple were brought here from Székesfehérvár Cathedral in 1860.

It includes part of the Museum of Ecclesiastical Art. The crypt can be accessed by steps to the right of the main altar.

The collection contains monstrances, chalices and other treasures of religious importance. The exhibit starts in the crypt and leads up the St Stephen Chapel.

Admission is included in the church entrance fee.

The church frequently houses organ concerts. The Matthias Church Choir and Orchestra is one of the oldest music companies in Hungary, operating continuously from 1688.

The organ of the church was built by the Rieger Kloss factory in the Czech Republic in 1909 from a donation of Franz Joseph emperor.

TIP: You can enjoy free organ recitals in the Church, presented by its choir and soloists once in every month usually on a Sunday.

The Hungarian Virtuosi Orchestra gives concerts around twice a month (usually on Saturdays). Tickets are available in various price categories, starting from 3 900 HUF.

The Solti Chamber Orchestra performs with

For concert dates see also the concert schedule on the official site of the church.

The 7 towers represent the seven tribes of Hungarians when they settled down by the Danube in the Carpathian basin in 896.

Fishermen’s Bastion never was used for military defensive purposes, it was created for only decorative reasons.

The building has many turrets, terraces, parapets and stairways offering an exceptional view of the Pest side and the river Danube.

You can take a rest in the cafe at the southern end during the tourist season.

A bronze statue of King St Stephen stands next to the bastion.

it stands next to Matthias church

The Baroque building with the wrought-iron sign above the entrance at 18.,

You can learn about the history of pharmacies, see original furnishings and tools of a medieval pharmacy.

TIP: see a list of other museums in Budapest.

The Pharmacy Museum building’s foundation is from the Middle Ages.

Hotels In the Vicinity of Matthias Church, Buda Castle

Being a major tourist attraction of Budapest, the Castle District offers some good hotels to stay at.

The St George Residence Hotel in Fortuna utca is ideal for a romantic stay. This historic boutique hotel is housed in a renovated Baroque house built on medieval foundations.

The Hilton Budapest Castle District stands right next to the Church. The hotel building includes the restored remains of a 13th century Dominican cloister that hosts concerts in the summer.

See other 5-star hotels in Budapest.

There’s also breakfast and homebaked pastries from 7.30 to 10.30. You can enjoy your meal or a glass of wine, the pleasant surroundings on the lovely terrace.

Find out more about Baltazar Hotel.

Getting Around, Map, What to See Strictly speaking Budapest City …

One of The Best Panoramic Views of Budapest Gellért Hill … Budapest Ferris Wheel – View The City from Top The …