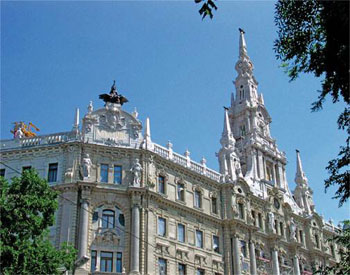 If you want to splurge during your time in Budapest then stay at the Boscolo Budapest Autograph Collection Hotel,.

It is one of the most luxurious of all hotels in the Hungarian capital.

The Italian hotel chain, Boscolo bought the neglected building of the New York Palace on Grand Boulevard (Nagykörút) in 2001 and managed to breath new life in the elegant edifice.

Similarly to the Four Seasosn Gresham, the New York Palace Boscolo Hotel is housed in an artfully refurbished palace with fine architectural details.

Pros at A Glance

The Hotel In Detail

The management of the project, lead by the architect Maurizio Papiri, paid extra attention on keeping the original historic eclectic style while creating a lavish hotel.

As a result Boscolo Budapest offers a wide choice of luxurious amenities to make your stay at New York Palace Boscolo Hotel unforgettable.

The Boscolo Budapest Autograph Collection is one of the highest rated luxury hotels in Budapest based on reviews provided by independent travellers.

Take a taxi transfer to your hotel from the Ferenc Liszt Airport (or from your hotel to the airport) at a great price.

Location – The Good and the Bad

Although the hotel is perfect for a romantic getaway in Budapest, the “too-central” location takes away a bit from the charm.

It certainly cannot compete with the views from Four Seasons Gresham Palace rooms, another fine 5 star hotel at the Pest side of the Danube, close to the Chain Bridge.

The central location, however has its advantage that almost every attraction in Budapest is within easy reach.

Trams 4-6 run along Grand Boulevard, while M2 (red metro) has a stop at Blaha Lujza tér.

Just entering the hotel you feel transported to an Italian renaissance palace from the noisy Grand Boulevard. 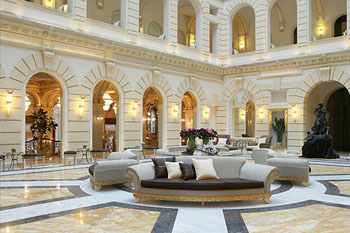 The arcaded gallery of the New York Cafe runs along the glass covered main hall that exudes an aerial feeling.

Great care was taken when selecting the materials for the interior decoration of the palace-hotel.

The highest quality of materials were used to express an old-world elegance yet create a home away from home.

The Italian designers implemented a daring, but playful design that is rare in any hotel.

The original lightning elements that were highlighted parts of the New York Palace’s design were recreated:

Lush textiles like silk and velvet were also exported from Italy.

All in all the former New York Palace shines in its splendour again after more than 100 years of its construction.

Read more about the history of New York Palace Budapest. 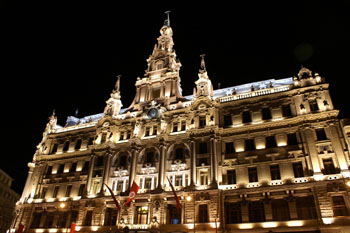 The New York Palace Boscolo Hotel has 185 rooms including:

Rooms are the most spacious among the city’s many 5-star hotels. The smallest classic rooms measure 30 sqm.

Suites have Nespresso coffee maker with an assortment of coffee capsules.

Spacious white marble bathrooms have soak tubs and separated showers in which scented shower gels and shampos are provided.

You can select from 3 types of breakfast from the room service menu. The staff speaks several languages and is very attentive.

Note that room prices can double during special events like the Formula 1 Hungarian Grand Prix, or during the Christmas-New Year’s period.

The opulence of the  hotel culminates in the two 140 square meter Presidential suites.

They are lavishly decorated with the finest materials:

The sprawling bed and the large marble bathroom offer utmost comfort.  The result is an atmosphere of refined luxury and contemporary elegance.

A perfect choice for a memorable stay in the Hungarian capital! 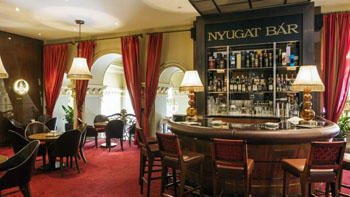 The hotel has a fabulous

All spots have their own unique atmosphere allowing guests to choose a place that best suits their moods.

Red textiles and dark wooden panels create a classic atmosphere in this room where you can relax while sipping a glass of fine cognac.

The bar is an island of peace within the stylish hotel where you can rest after an excellent dinner in the Salon Restaurant.

On the lowest level the Boscolo Spa offers its services to everybody.

Candles give soft background light in the zigzagging rooms that were designed to resemble alpine ice caves.

The New York Cafe & Salon Fine Dining Restaurant are the most highlighted places within the hotel.

The food compositions created by the talented head chef offer you a taste of Italian and Hungarian cuisine.

The cafe and the restaurant have separate menus.

The Salon restaurant has an impressive wine list with wines from Hungary’s best vineyards many available by the glass:

Menu in  the Salon Restaurant

Even if you don’t plan to stay at the hotel, do drop by the New York Cafe which is one of the historic landmarks of Budapest.

At its heyday, in the first part of the 20th century the cafe boasted mythical fame. It was a place to be seen in Budapest.

The café became a second home for 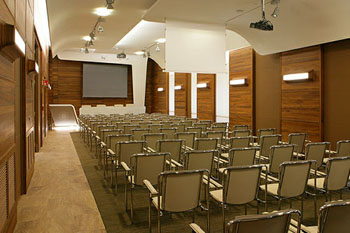 The hotel is a perfect venue for business meetings and conferences. The several meeting rooms can accommodate up to 500 persons and is equipped with latest technology.

All rooms open to the balcony looking down on the beautiful main lobby.

Other Services Available in the Hotel:

Attractions Nearby & Things To Do Suggestions