The renovated Ottoman-era Rácz Bath and the adjacent luxury thermal hotel and spa in Buda was expected to open in summer 2014.

The refurbishment of the historic Rác Bath and construction of the new 5-star Hotel were finished in 2010, but it had to stay closed due to years of litigation between the city municipality and the owner of the hotel and bath complex.

Unfortunately the fate of the hotel and bath is still unknown in 2016. 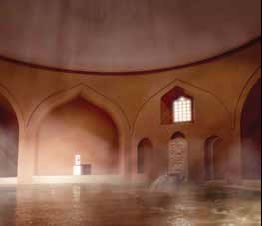 The bath and hotel is located in a large park at the foot of the Gellért Hill.

History of the Bath 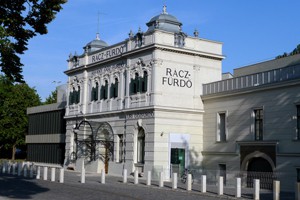 According to some sources, the original bath was built during the reign of King Sigismund in the 15th century while others say that during King Matthias by now historians are sure that it was constructed by the Turks in the 16th century.

They built the original bath with its octagonal dome hall in 1572 and it was one of the smaller bath houses in Buda. It survived the siege of Buda by the Christian army in 1686. After that it was owned by the Habsburg Imperial chamber then the Heinrich family bought it in 1860.

The bath was rebuilt in 1864-65 then expanded in 1869-70 by the plans of the renowned architecture Miklós Ybl. The romantic style pools originate from this 19th century expansion.

The Rác was officially declared a medicinal bath in 1934 by a decree of the Ministry of Home Affairs. In 1935 the city of Budapest bought the spa.

World War II. caused much damage in the building, followed by delayed reconstruction in the 1960s then continuing neglect in the 1980s.

Then in 1998 reconstruction plans of the bath and building of a thermal hotel were prepared and accepted by the city in 2002 and works were finished in 2010.

Architecture of the Rác Bath

The architecture of the spa is a mixture of Oriental-Turkish and neo-Renaissance, Romantic 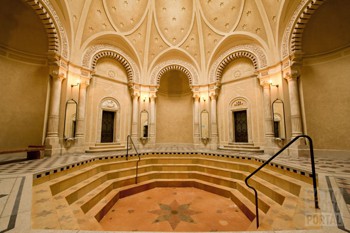 The oldest part is the Turkish dome (built in 1572) that was called Kücsük Illica= small bath at that time.

This part managed to survive the coming centuries fairly intact so it could have been completely restored to its original structure.

The walls, arcs, windows, and the stairs leading to the pools all have been recovered.

The Romantic and neo-Renaissance parts were built in two phases in 1865 and 1807 according to the plans of Ybl Miklós, a renowned architecture of the era (his best-known works include the Hungarian State Opera House, St. Stephen’s Basilica, the Várkert Bazaar and Gardens, the Hungarian Academy of Sciences on Széchenyi Square). 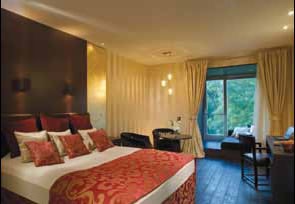 From the 38 Celsius thermal pool you can admire the impressive 9 m high Ybl dome.

The calcium- and magnesium hydrocarbonate-rich medicinal thermal water is beneficial to the bone structure and joints. All architectural details (crenelated walls, contemporary showers) were retained.

The Neo-Renaissance cupola is painted blue and dotted with stars, there’s a 40 celsius pool under it. The reliefs on the walls depict contemporary 19th century occuupations and inventions. 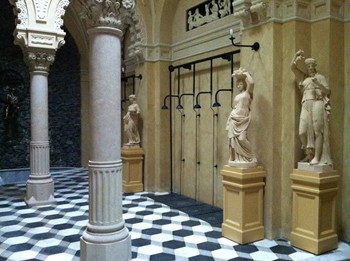 The historical facilities listed under the UNESCO World Heritage have been restored and blended into a modern luxury Thermal and Day Spa of 8000 sqm including:

The Spa also offers a dedicated VIP section. Most of the 67 rooms offer a wonderful view of the Royal Palace on Castle Hill, the historic spa or the park.

offering both Italian and Hungarian dishes. We all hope that the hotel and bath will finally open in 2016.

TIP: Until Rácz opens stay at one of the other hotels with great spa and wellness facilities.

You can find some great photos about the spa & hotel on this Facebook page.

Budapest Beaches – if you want to enjoy bathing in open-air pool.