If you think you’ve seen everything in downtown Budapest let me show you a couple of sights in Buda including some hidden spots.

Although I’m a local, I’ve discovered some attractions that were new to me.

I’ve planned to explore this part of the city, namely northern part of Buda for a long time and a hot Sunday morning offered the perfect opportunity to do so. 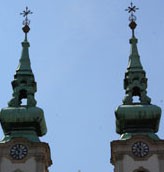 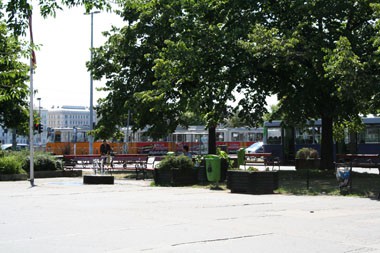 I started my tour at Batthyány Square, the center of Budapest’s old suburban part (also called Watertown -Víziváros-) lying between the Castle Hill and the Danube.

The church was built between 1740-1762 based on the designs of Matthias Nepauer and the Hamon brothers. 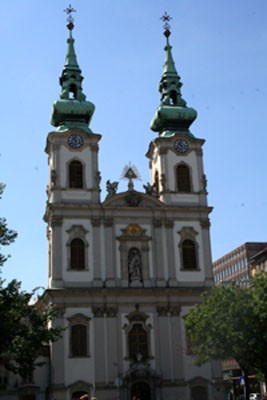 On the top of the main gate symbolic figures of faith, hope and love greet the visitors, above them the coat of arms of city of Buda, and in the upper niche statues of St. Anne and Mary guard the entrance.

20th-century frescos adorn the interior that form a cross. The altar and the other paintings date back to the 18th century.

From the ceiling of the dome a beautiful fresco by Pál Molnár looks down on you.
The presbytery of the church functions as a coffee house (Angelika Cafe) frequented by elderly local citizens. 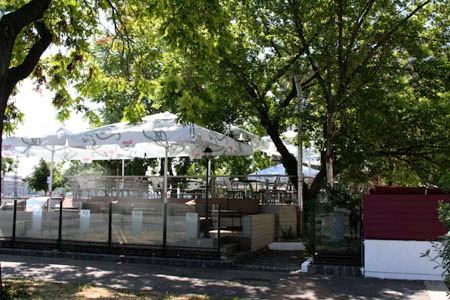 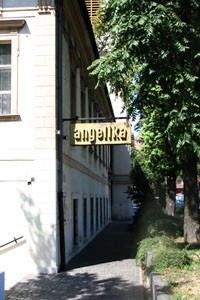 A puritan building form the 18th century, (a former Franciscan convent later a hospital, now the Maltesian operates a home for elderly people in it) stands opposite the St. Anne Church.

Connected to the convent is a single-towered church with carved altars, painted frames and benches made by the Franciscan monks. 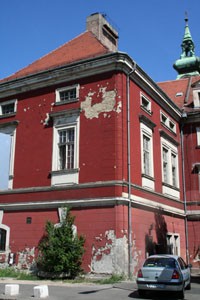 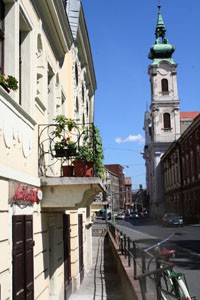 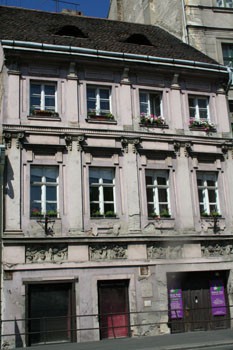 The square offers two other monuments: the Baroque houses at No. 3. and 4. the latter is known as the largest inn in Buda in the Middle Ages.

The covered market on the eastern side of Batthyány Square is the only market in Budapest open on Sundays (apart from some awesome Farmers’ Markets on weekends like the one in Király utca, in the Central Passage or the Szimpla Kert Bio Market at 14., Kazinczy utca, distr. VII., every Sunday from 9.00 to 14.00.)

You can have a few bites at Nagyi Palacsintázója (Grandma’s Crepe Bar, open: Mon-Fri: 0-24.00) next to the iron structure building of the market. 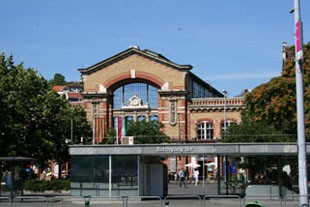 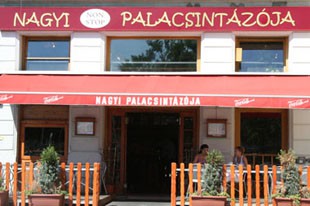 Along and Around Fő utca (Main Street)

Walk north along Fő utca (Main Street) lying parallel with the Danube. The huge Parliament building on the Pest bank will appear from time to time between blocks of buildings.

The slightly shabby building of the Király Baths, one of Budapest’s Turkish Baths, is hiding shyly among a bunch of trees at the side of a small plaza. The prestigious bath dates back to the 16th century when the Turks reigned in Hungary.

Find out about ticket prices and other information on the Király Thermal Bath.

TIP: The Veli Bej is another beautiful Ottoman-era bathhouse in the area at 7., Árpád fejedelem útja, next to the Lukács Spa. 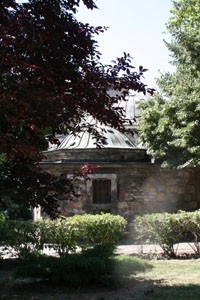 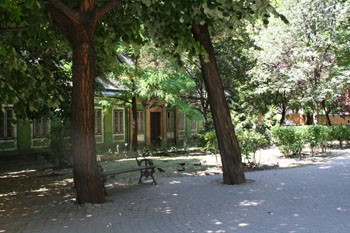 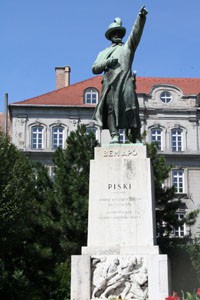 The nearby Square that leads you to the Danube bank was named after József Bem, a Polish general and hero of Hungary’s 1848-49 war of independence against the Austrian regime.

To tell you the truth I skipped this museum and continued my walk as far as the end of Fő utca. 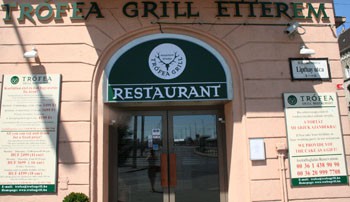 Tomb of Gül Baba and Its Neighbourhood

Not being a hearty eater I went on towards a flight of stairs leading somewhere a couple of ten meters above street level. I climbed the stairs and ended up a secluded tiny park, Margaret Square (Margit tér), with a few benches and trees.

The grass-covered hilltop is a peaceful island in the middle of buzzing north Buda where you can take a rest and listen to the humming city life.

On the street leading past the hill, Margitkert Restaurant (address: Margit utca 15., Tel: 326 1862) invites you to taste traditional Hungarian dishes and listen to gypsy music on the evenings.

From Margit utca turn into Mecset utca that leads you straight to the Tomb of Gül Baba (Gül Baba Türbéje): a Muslim pilgrimage site. A giant plane tree greets you after climbing up the steps to the garden. 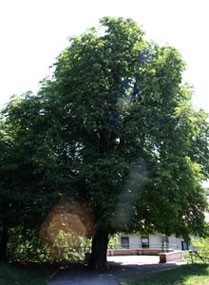 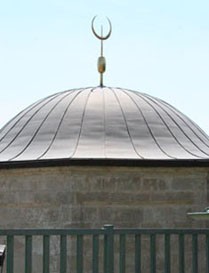 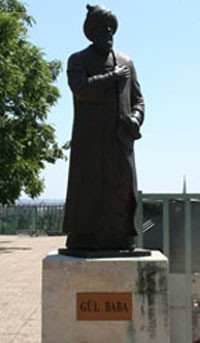 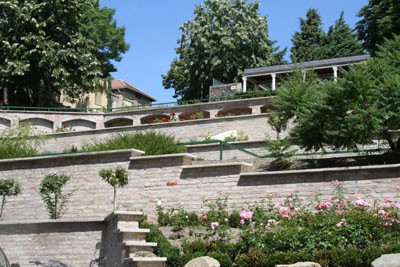 He was a talented horticulturist and introduced cultivated roses to Hungary, that’s why this part of Buda – today an exclusive residential area – is called Rózsadomb (Rose Hill).

The rose bushes in the garden commemorate this fact. His sarcophagus lies in the octagonal-shaped, domed tomb built between 1543-48.

You might not be enthusiastic about Muslim monuments but the stunning view is worth climbing up there.

Behind the tiled rooftops of residential Buda, the Parliament building and the silver ribbon of the Danube draw the eye. 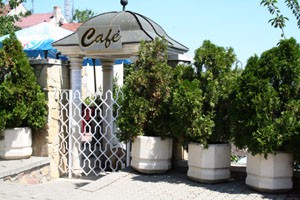 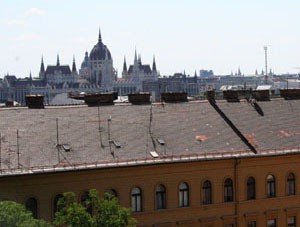 Fill up with caffeine at the cafe next to the memorial.

Daubner – the Best Confectionery in Budapest

For the best cakes and pastries in Budapest you’ll have to walk a bit more, up Frankel Leó Street then continue on Szépvölgyi út where an unpretentious confectionery, the Daubner sells the most luscious cakes I ever happened to taste.

Take tram No 17 from Margaret Bridge if you’re don’t feel like walking (though some physical exercise lessens the guilt felt over the huge calorie-intake) and get off at the 4. stop at Kolosy tér, from there walk up to Daubner on Szépvölgyi út. 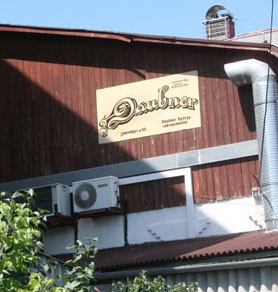 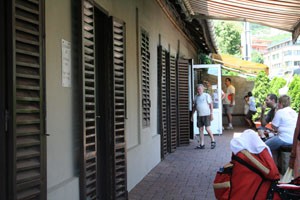 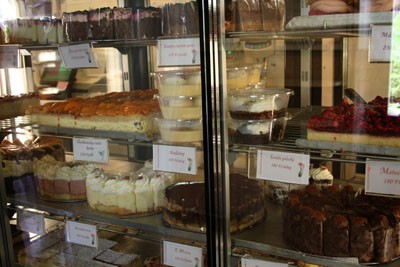 The long queue winding in front of the counters packed with creamy delights like Dobos cake, Caramell Cake, Chocolate gateau, or Chestnut cake, reflects the popularity of the place among Budapesti people.

Their ice cream is also of top quality.

Salty snacks called pogácsa in various flavors (Gouda cheese, potato, ransom) are also sold and they’re just as delicious as the sweet desserts. A slice of cake costs around 300-600 HUF.

See More Budapest Tours or Go to Sightseeing in Budapest.