Natural Adventures Under the Ground

Do you want to do something more adventurous than the usual sightseeing? Go caving in Budapest and discover its underground natural beauties. 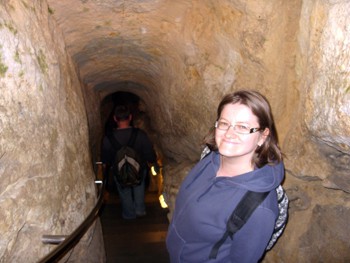 Budapest is the only capital that has natural caves in the middle of the city. The Hungarian capital is not just the city of spas but the city of caves too.

Would you think that it has about 170 smaller and bigger caves? The same thermal springs formed them that supply water for the thermal baths in Budapest.

The air in some of these caves has medicinal qualities.

Ancient Magyars named the place after the caves they found in the area where Budapest is located.

When they conquered the area in the 9th century AD they found a hill full of holes (today’s Gellért Hill).

Hungarian language didn’t have a word for cave so they borrowed the Slavic word ” pest” from the people who lived here. They named the present Gellért Hill Pest Hill.

Most Budapest caves were discovered at the beginning of the 20th century, during major housing and drainage works.
There are 9 strictly protected caves in Budapest, 3 are open to visitors.

Caves That Can be Visited, Cave Tours

Not all parts of the 30 km long cave system is open for tourist. Here are the ones that can be visited without much exertion.

Can you imagine that another world lies under your feet when you stroll on the old cobblestoned streets in Buda Castle District? The Castle Caves stretch several kilometers long.

Only part of it was formed naturally, inhabitants of the Castle District also excavated labyrinths, and cellars in the hill for protection purposes during the many wars. 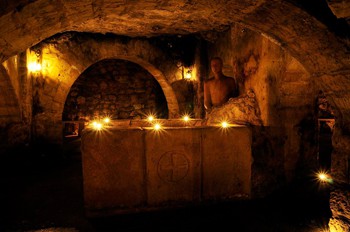 The Labyrinth is part of the cave system of the Castle Hill. It is conveniently located in the centre of the Castle area so you can include it in your sightseeing program there.

The 1 200 m long cave system is around 10-15 m below ground level with spacious corridors and exhibition rooms.

The caverns were already inhabited by Paleolithic men a couple of hundred thousands years ago, then locals used the caves for various purposes in the Middle Ages: shelter, storage room, wine cellar.

Legends are abound from long-ago times: about buried treasures of the Ottoman rulers, lovers walled up by the pasha of Buda, a restless ghost called “Dark Count” etc. The rich hid their valuables here from tax gatherers in medieval times.

It can be easily toured because there are no tight tunnels, or ladders to climb – an exciting program for families with children.

The Labyrinth houses some great exhibits: 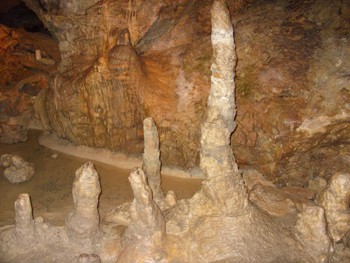 The most beautiful and the longest cave in the Buda Hills with its 29 km length (and the second longest in Hungary).

Only 500 m can be explored with a guide, but it’s rather demanding because of the great differences of height.

The stunning dripstone formations, like the “Organ Pipes” or “Beehive” will make up you for the effort. Ladders and steep stairs help you to move forward but the tour is not recommended for children and for physically challenged.

If you still have strength after Pálvölgyi cave hurry to catch the hourly tour in the Szemlőhegyi cave. It is only 800 km far.

250 km can be visited out of the 2 200 km fully explored cave that consists of several wide corridors. You can admire the unique mineral formations, the so-called peastones and the aragonite crytals resembling bunches of grapes.

In the entrance hall you can see an exhibition about caves of Budapest. The cave’s cool, damp air is beneficial for respiratory diseases.

The temperature is around 12 °C (54 °F) all through the year down there so make sure your dress accordingly. There is a playground and a geological educational trail for children.

The tour is around 40 minutes long and recommended for all ages.

Both the Pálvögyi, and the Szemlőhegyi Caves are under natural protection.