One of The Best Panoramic Views of Budapest

Gellért Hill is a 140-m high dolomite rock rising above the Danube in Buda. 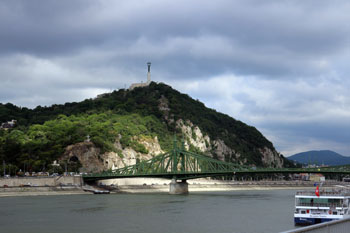 It is one of our favourite excursion spots besides Margaret Island, the Buda Hills, or the Kopaszi Dam.

We often hike the hill with the kids, enjoying the wonderful scenery (trying to neglect the meaningless graffiti on each bench and some other nuisances) the panorama, and have a lunch or coffee with cake somewhere nearby.

If you have a couple of hours during your visit to Budapest include an excursion to Gellért Hill in your program.

Apart from the historic sights, the hill also offers some of the best spots to take photos of the city.

According to the legend, witches visited the hill every night and were riding on the back of a human being.

Besides this fantasy, the hill offers several more down-to-earth attractions:

The Hill, and its environs, are part of the UNESCO’s World Heritage Sites along with the Banks of Danube in Pest from Liberty Bridge to Margaret Island.

TIP: We often go for excursions up the hill. Our kids love the slides and the playground.

Our older son was also captivated by the World War 2 and Russian artillery exhibited next to the Citadel. Note that the steep paths and the many steps are not ideal for toddlers or with pram/stroller.

Gellert Hill received its name after bishop Gellért who came to Hungary from Italy around 1000 AD.

King St. Stephen invited him to help converting the Hungarians into Christianity.

Some resisting pagans rolled him down the hill in a barrel into the Danube in 1046.

A large statue, holding a cross in his right hand, commemorates the bishop on the northeastern slope of the hill, facing Erzsébet híd (Elizabeth Bridge).

The hill is also important from hidrogeological point of view.

Part of the drinking water supply of Budapest is stored in an inner reservoir within the hill.

The spectacular fireworks on our national holiday, 20th August are launched from the hill.

Getting to Gellert Hill 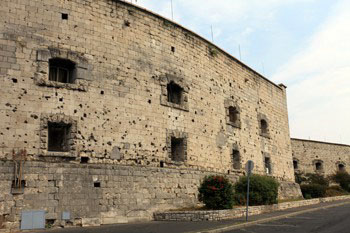 The Habsburgs realized the strategic importance of Gellert Hill: they built a fortress on top of the hill after they suppressed the 1848-49 Revolution and War of Independence.

Gun shafts aim at the Danube and the Buda Hills.

The purpose of the Citadel was to remind the rebellious Hungarians who ruled the country.

The citadel was the most despised establishment in Budapest back then and Hungarians called the it Budapest Bastille.

The Habsburgs handed it over to the City Council at the end of the 19th century.

Parts of it were symbolically destroyed.

The Citadel has served several purposes since then, it’s been a prison camp, temporary accommodation for the homeless, the site of an anti-aircraft battery and since the 1960-ies the fortress is a tourist attraction.

It’s worth coming up here, and enjoying the breathtaking vista. Walk up the upper level and whole Budapest will be sprawling in front of you. Admission is 300 HUF, cc. 1 EUR.

Statue of Liberty (Szabadság szobor) on top of Gellert Hill 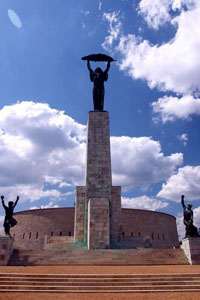 This enormous female statue stands in front of the Citadel.

You can see her from almost all parts of the city. She became the symbol of the Hungarian capital.

The Statue of Liberty commemorates Hungary’s liberation from the Nazi rule.

According to the story she was originally designed to the memory of Regent Horthy’s son.

Horthy was a right-wing leader of Hungary between the two World Wars. His son died in a plane crash.

The statue was designed to hold a propeller blade in her hands. By the time she was erected, history had Horthy swept away.

Instead of the propeller blade, a palm tree was placed in her hands and a Soviet soldier was added to the base.

Although all communist monuments were pulled down and re-erected at the edge of the town in the Memento Park, the Statue of Liberty remained.

Only the Soviet soldier from the base and the names of the Red Army soldiers who died in fights during Budapest’s siege were removed.

I can’t imagine Budapest’s city scape without the Statue of Liberty. 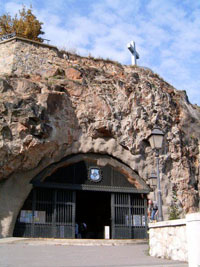 Location: just up from Szent Gellért tér, opposite the entrance to the Gellért Baths.

The church was formed in a natural cave system similar to the caves in Lourdes.

It was dedicated in 1926. In the early thirties the Pauline monastery order expanded and run the church until the 1950s.

The Pauline is the only monastery order of Hungarian origin.

The order received its name after Paul, a 3rd century Egyptian hermit who lived in the desert. His only company was a raven; it brought him food, half a slice of bread every day.

In the 1950s the communist arrested the monks, executed their leader and walled the church up.

The wall was pulled down in 1989 and the church reopened. You can see a piece from this wall at the cave entrance.

See more photos on Gellert Hill taken on our excursion in September 2013.. 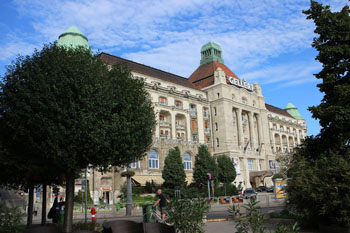 There are hot thermal springs deep inside Gellért Hill that supply water for three spas.

The most famous and upscale is the Gellért Thermal Baths attached to the Hotel Gellért.

This large spa complex was built in 1918 in Art Nouveau style.

Read more about the Gellért Bath, and the 4-star Hotel Gellért.

The Turkish-style thermal baths were once separate for women and men.

From 1st January 2013 the bath is coed, both men and women can use the pools and other services at the same time.

The drinking fountain in front of the hotel on Gellért Square has been providing water since 2004. It’s not spring water though just tap water – but it still comes handy on a sweltering day.

The Rudas Bath, a historic spa built by the Turks in medieval times, stands at the foot of Gellért Hill on Döbrentei tér.

It was refurbished a couple of years ago and has

TIP: The Hungarian capital is a spa city, find out more about other Budapest spas.

The northern slope of Gellert Hill is known as Tabán.

The Tabán was a popular entertainment place. The houses had to be demolished due to public health reasons.

The Deer House still represents the old atmosphere of the palce.

This triangular building was built at the beginning of the 18th century. It was a café then; you can still see the café sign above the gate.

Today it houses the Aranyszarvas Restaurant, famous for its game dishes. In winter the snowy slopes are covered with sledging children.

In summer the Tabán becomes alive again, with many rock and folk concerts.

Must-see attractions are the two pieces from the Berlin Wall that have been erected here.

TIP: Since the two hills are close to each other, after a walk on Gellért Hill you can explore the Buda Castle District, the panorama of which you can enjoy from the top of the Hill. Devote at least half a day to each sight.

On the way to the castle you can admire the restored, historic Várkert Bazaar designed by Miklós Ybl architect.

Places to Eat on Gellert Hill or Nearby

If you love meat try one of the game dishes in Aranyszarvas Restaurant.

In a sunny afternoon have freshly brewed coffee or tea with homemade desserts in the Café of the Gellért Hotel.

TIP: For a quick snack walk across Szabadság Bridge to Pest and have a pastry in the Great Market Hall (Vásárcsarnok). On its upper level you find buffets and restaurants as well, if you want to have a warm meal.

Pagony – An Unusual Eatery in the City 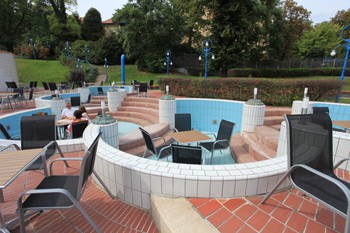 Pagony is located in the former children pools of the Gellért Bath.

It is a nice garden restaurant (though the original pools and showers are a bit run-down) offering Mediterranean-style dishes: quiche, burgers, steaks, desserts.

Some great Czech and Hungarian craft beers are offered on tap (550 HUF/0.5 L).

Other Green Areas in Budapest 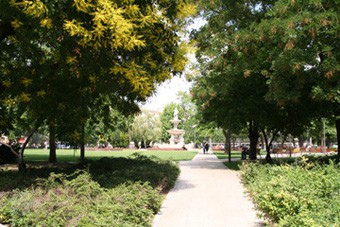 If you wish to get away from the hustle of the city and get some fresh, clean air head for the Buda Hills.

If you don’t have time for that visit some of the other green spots near the city center: