Széchenyi Lánchíd – The First Permanent Connection Between Buda and Pest

The Chain Bridge is one of the best known landmarks of Budapest.

The picturesque historic stone bridge straddles the Danube between Széchenyi Square on the Pest side and Clark Ádám Square in Buda.

You can walk across it from Buda to Pest and back – an excellent way to absorb the World Heritage-protected sights and panorama and to take wonderful photos.

It offers one of the city’s most stunning views with the mighty Danube flowing below you.

The grandiose Parliament dominates the riverside in Pest, while Castle Hill towers at the Buda end.

Note: The bridge and the Tunnel will be closed from end of August – or September 2017 till 2019 due to reconstruction.

History of Chain Bridge – The bridge in Numbers – Nearby Attractions – Restaurants

The panorama at night will fascinate you even more, when the lights of the city reflect in the dark river.

Usually the bridge is open for pedestrians during the August 20. / St. Stephen’s day festivities.

For centuries only a pontoon bridge connected Buda and Pest. Count István Széchenyi (1791-1860), the Greatest Hungarian came up with the idea of constructing a permanent bridge across the Danube.

In December 1820 he received the news that his father had died in Vienna.

Because of the hard winter the pontoon bridge was out of use.

Stranded on the Pest side for a week, Count Széchenyi vowed that he would finance construction of a permanent bridge over the Danube, regardless of the costs.

It took him almost 50 years to achieve it.

In 1836 Széchenyi commissioned William Clark, an English engineer to draft the plans of the bridge.

Construction began in 1842. A Scotsman, Adam Clark oversaw the works (he is a namesake of William Clark).

The final phase of construction took place during the 1848-49 Revolution and War of Independence.

One of the first walkers across the bridge were the soldiers of the Hungarian Army of Independence.

They retreated from the Austrian troops in 1849.

The Austrians attempted to blow up the bridge, but luckily the explosives did not go off.

The bridge facilitated the union of Buda, Pest and Óbuda in 1873 and contributed to Budapest’s boom.

Széchenyi collapsed mentally in 1848 and was not able to see his dream come true.

Unfortunately the Germans succeeded in destroying the bridge during the siege of Budapest in 1945.

Reconstruction began in 1947 and Chain Bridge was rebuilt in its original form by 1949.

Adam Clark dug a tunnel under Castle Hill to provide easy access to places in Buda behind the hill. The tunnel is exactly the same long than the Chain Bridge.

According to a popular anecdote, when it rains the bridge can be pushed into the tunnel to prevent it from getting wet.

The Chain Bridge in Numbers

The width of the Danube required building a suspension bridge.

According to the story, the sculptor, Marschalko János forgot to carve out the lions’ tongues.

A boy made a remark about it at the opening ceremony. The sculptor became so distressed that he jumped off the bridge into the Danube.

Attractions Near the Chain Bridge, Budapest

Attractions are abound in the immediate vicinity of the Széchenyi Lánchíd, we’ve listed only the nearest ones here.

The complex have been neglected in past decades but following a large-scale renovation it shines again in its original beauty.

The  buildings, gardens, an underground event centre, cafes and restaurants – commonly known as Várkert Bazár/Castle Bazaar by locals had been completely renewed in 2014.

The place regularly hosts concerts and various festivals (Easter, Christmas) and you can also view unique exhibitions in the palaces.

The square at the Buda end of the Chain Bridge received its name after the constructor of the Bridge, Adam Clark.

From spring till autumn colourful flowers adorn the middle of the park.

A strange-looking oval stone stands near the funicular, the 0 kilometer stone. All road distances in the country are measured from here.

The funicular departs up to Castle District from the square. The district offers plenty to see with stunning vista from the Fishermen’s bastion.

Shoes on the Danube

If you walk along the riverbank towards the Parliament you will find the famous Shoes on the Danube memorial.

The 60 pairs of cast iron shoes were created in 2005 in memoriam of the thousands of Hungarian Jews shot into the daube in 1944-45.

Stroll between Széchenyi Square and Erzsébet Bridge along the Danube in Pest and take in the superb view of the opposite Castle Hill and the river.

Rows of cafés and luxury hotels line the riverbank.

Although Dunakorzó had its heyday in the second half of the 19th century, it still tempting for a walk.

Downtown Budapest is just the right place to explore it on foot.

See also our selection of walking tours in Budapest.

Where to Eat near the Chain Bridge – Restaurants & Cafes 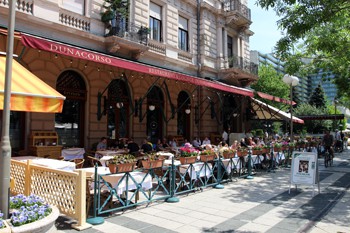 The Danube Promenade, a panoramic walkway between the Chain Bridge and Erzsébet Bridge in Pest, offers wide selection of great restaurants.

Prices are high due to the fashionable and touristy location.

TIP: The major hotels along the riverbank have outdoor terraces (Sofitel Budapest Chain Bridge, Marriott Hotel, Intercontinental) ideal for a drink and snack.

You can have a good meal on one of the moored boat restaurants as well (the Spoon Boat Restaurant is a favourite of mine).

Open between Lunch & Dinner for Snacks.

KOLLÁZS is one of the newest gems of the Budapest’s constantly evolving restaurant scene opposite the Chain Bridge in the Gresham Palace.

The interior evokes the atmosphere of the 1910s and ’20s, a worthy tribute to the city’s legendary coffee-house culture and the secession era.

A stylish, comfortable environment for breakfast, lunch or dinner with four distinct areas:

A nice place to try for a true urban feeling in downtown Budapest!

The neighbourhood’s one and only craft beer house with 18 beer taps offering a taste of local brews and simple, tasty food.

Enjoy the unique riverside panorama at the Pest bank of the Danube in an Italian-style tavern.

Serves all kinds of Greek dishes at affordable price despite the central location.

An inventive bistro centered around the fine Hungarian wines made by János Bolyki from the Eger wine region but other wine regions’ offers can be also found on the wine list (Badacsony, Villány, Szekszárd and Tokaj).

There’s a separate chef’s offer and a weekly menu at a friendly price.

Pálinka (a popular local fruit spirit) also gets the attention on the drinks menu.

The scenic view of the Gellért Hill and the Danube balances the minimal interior design.

The two-course daily menu for 990 HUF is a steal at such a premier location in Budapest..

Another place with Italian cuisine along with some Hungarian dishes.

ZONA – Fine Dining with a View

ZONA is a gourmet restaurant and contemporary wine bar in district I. next to the Buda end of the Chain Bridge.

The above mentioned Várkert Bazaar and Gardens is located just south of the restaurant at a moment’s walk.

But enough about the prime location and the dazzling view you can enjoy from the small, romantic terrace, the good news is that the food is superb too.

Following a change of chefs and a refurbishment in 2015 ZONA managed to renew offering fine food food within a youthful, laid-back environment.

Try the degustation menu for 14 900 HUF/person (without drinks):

A good-value place – top-quality meals from fresh, seasonal ingredients but not overpriced! Gigantic Reminders of the Past Visit the Memento Park (or … One of The Best Panoramic Views of Budapest Gellért Hill …