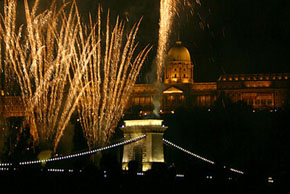 What Does Hungary Celebrate On August 20.?

20th August is St. Stephen’s Day in Hungary and it is a public holiday. We celebrate the foundation of the Hungarian state more than 1000 years ago. 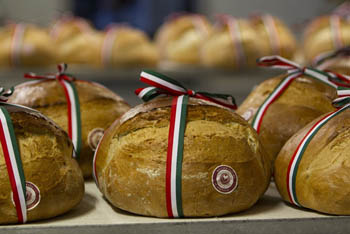 The new bread is blessed on this day too.

Besides commemorations organized by political parties, countless programs await both locals and tourists all the day round

Learn about the variety of programs to plan your day well and catch a glimpse into Hungary’s history, culture, and gastronomy. Have a wonderful August 20th National Holiday in the Hungarian capital!

This year St. Stephen’s Day falls on Tuesday. Most shops, markets, services will be closed on both Monday and Tuesday.

The majority of cafes and restaurants – especially in the city centre – are open though.

Note: Public transportation services operate according to holiday schedule but with the Fireworks and other festivities changes in service – especially tram 2 along the Pest riverbank – can be expected. 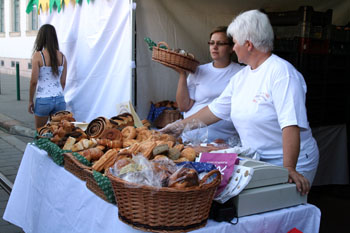 A Gastro Promenade on the Danube Bank in Buda, in front of the Várkert Bazár/Castle Bazaar.

Location: Between Várkert Bazaar and  Döbrentei Square in Buda (north of Chain Bridge)

Visit the Street of Hungarian Flavours (Magyar Ízek Utcája) in front of the Várkert Bazaar, Buda, – a beautiful, refurbished series of buildings built at the end of the 19.century – to have a taste of traditional Hungarian food and drinks.

Cake of Hungary – along with the Sugar-free Cake – will also be introduced there on 18th August that everyone can taste (prepare for a long queue though).

Each year a special cake is prepared to celebrate our country’s foundation.

The National Guild of Hungarian Confectioners selects the best recipe submitted by confectioners from all over Hungary.

With the sugar free birthday cake people with diabetes or the health conscious can also enjoy a slice of dessert.

In 2019 the Little Chestnut (Kicsi Gesztenye) cake made by the A Capelly Confectionery in Szeged town won.

The delicacy is without sugar, white flour, artificial additives and preservatives.

A sponge layer is covered with hazelnut-almond crunch then a blueberry layer spiced with lemon and star anise followed by light chestnut mousse and crowned with sugrafree milk chocolate.

It’s a cheerful and light concoction that everyone can enjoy without remorse.

Concerts by local bands, dance performances provide entertainment for the whole family on the square at the Buda end of Chain Bridge.

On the Stage of Várkert Bazaar

Hungarian bands will play on the main stage of Várkert:

The Street of Hungarian Flavours foodie festiveal welcomes everyone on each 3 days of the holiday, from 10.00 in the morning.

TIP: Visit the Parliament on Guided tour, starting at 11.00,  then enjoy an early afternoon cruise on the Danube! 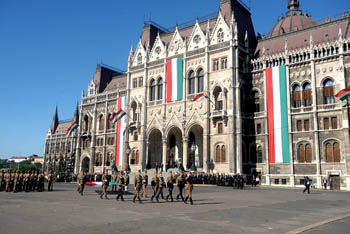 As usual, a series of state ceremonies launch the holiday programs in the morning, on St. Stephen’s day, August 20. to commemorate the Foundation of the Hungarian State.

The main venues of the state programs are Kossuth Square in front of the Hungarian Parliament, and Heroes’ Square.

Besides the state celebrations, a wide range of other programs welcome visitors both in the morning and in the afternoon ensuring wonderful time for the whole family.

Venue: over the Danube at the Parliament

A spectacular show with the backdrop of the imposing building.

The Festival of Folk Arts in Buda Castle will be still going during the August 20. holiday.

This year the festival will be focusing on the theme of embroidering with several nations invited to show their artworks.


Open Day in the Hungarian Parliament 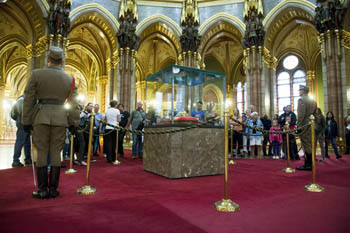 You can view the

Blessing of the Bread and Harvest Procession

The blessing of the new bread and a harvest procession

The mass will take place in front of the St. Stephen’s Basilica at 17.00. 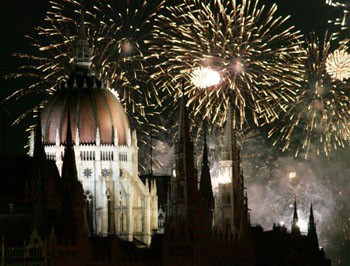 The 30-minute long dazzling show can be seen from numerous points in Budapest, and the  especially at the Danube banks in Pest and Buda.

Best Spots to View the Show:

TIP: One of the best venues to enjoy the Fireworks is from a ship on the Danube.

You’ll be also treated to a  pleasant dinner and live music.

Read more details on the Fireworks Show with Boat Tour/Dinner on the Danube on August 20, 2020.

Stephen (István in Hungarian, was born in 969. and died in 1038.) was Hungary’s first king and he laid the foundation of the state by converting the nomad and pagan Magyar people (Hungarians) into Christianity.

Until the end of the 10th century the seven Hungarian tribes often attacked and robbed Western European nations. After a major defeat in 955, the Hungarian leaders decided to

István realized that he can only achieve this by converting Hungarians into the Roman Catholic religion.

The Crown of the First King

He received a crown from Pope Sylvester II and became Hungary’s first king in 1000 AD. The Holy Crown has survived the coming centuries and it is now Hungary’s most precious treasure.

You can view the Holy Crown in the Parliament (open day on 20. August)

He built churches all around the country and invited Catholic priests to help to lay down the foundations of Christianity. István formed new, strict legislations instead of the former pagan rules and took administrative measures to organize the country.

As a result of King Stephen’s efforts, Hungary became a strong state and a protector of Western Europe during the Medieval Ages. Read more about the History of Budapest.

Stephen was canonized on 20th of August in 1083 and became the patron of Hungary. For the canonization procedure King Stephen’s remains were exhumed.

According to the story his right hand was found as fresh as the day he was buried.

The hand was detached and since then everybody can view our first king’s mummified right in St. Stephen’s Basilica .

August 20. became Hungary’s national day and stayed to be until 1945, when Communist leaders prohibited celebrations due to the religious nature of the holiday. In 1990 the Hungarian Parliament declared 20th August national holiday again.