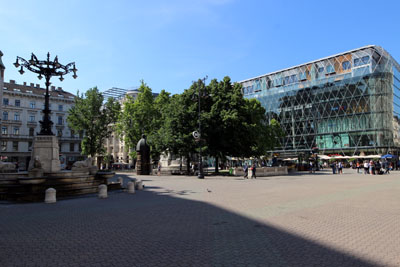 The centrally located Vörösmarty Square (Vörösmarty tér) is unmissable since it lies in the inner city of Budapest (district V.), at just a moments walk from the Danube.

The square hosts large-scale events liked very much both by locals and travellers visiting Budapest.

This is the place where 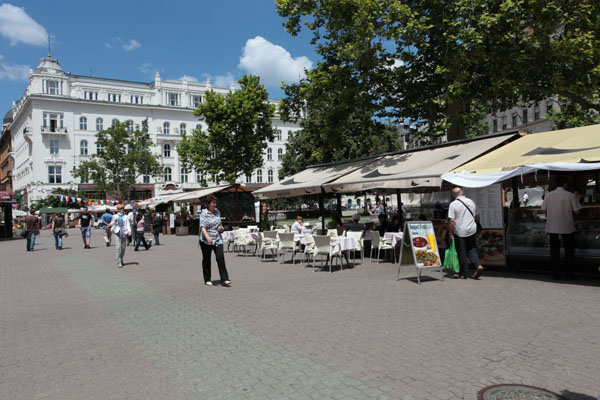 Continental Europe’s first underground line (built in the late 19. century and commonly known as Kisföldalatti in Hungary), connecting the downtown with the City Park (Városliget) has a station here, right in front of the Gerbeaud Coffee Hosue (see below).

Vörösmarty tér is one of Budapest’s top sights with a lot going on all year round. Easily accessible by walk or public transport for any points of the city.

Plenty of shops, restaurants and cafes are located here. You’ll inevitably end up here one way or the other while exploring the city.

The marble statue of Mihály Vörösmarty (1800-1855), a romantic poet of the Reform Era and stands in the centre. The square received its named after him in 1926.

Before that it had gone by at least a dozen various names,

The first two verses are sang usually at the end of ceremonies.

The impressive white building at the north end is the famous Gerbeaud Cafe & Confectionery known for its delicious cakes and pastries since its establishment in 1870.. 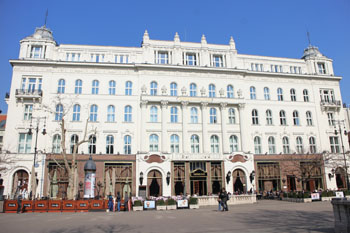 Their coffee is good too now that they source the beans from Hungary’s first third wave roastery, Casino Mocca.

The terrace of the cafe is almost always full of people, mostly tourists.

Try one of the traditional Hungarian cakes (a slice costs 2 250 HUF):

The former city wall of Pest ran at the north end of the square – this fact is remembered by a metal plaque on the wall of the Váci1 Shopping Centre – the huge glass-covered building that dominates the west corner.

The writing says that here stood the Váczi Gate, the northern gate of the Pest city wall.

The building where now the Váci1 stands used to housed the headquarters of Hungary’s first national bank then the Budapest Stock Exchange (between 1990-2005).

The palace was restored and turned into a modern, spacious building with shops on the ground floor.

A fine-dining place that earned Hungary’s second Michelin star after Costes in 2011 but it was the first time that the work of Hungarian chefs (Tamás Széll and Szabina Szulló) was recognized.

Onyx is located inside the Gerbeaud House where the cafe operates.

Entrance is from the eastern side of the building.

You can enjoy gourmet meals in the imposing dining room: two tasting menus:

The iconic burger bar opened its Hungarian joint in 2011 in the Váci1 Shopping Centre.

The Szamos is one of the oldest confectioneries in Hungary with several shops in the city.

It boasts a splendid interior with Herend porcelain pictures on the walls, dark wood and glass cabinets, and the symbol of the place: a large chocolate tree.

Golden cocoa beans hang at the end of the silver tree branches that are illuminated at night.

You can choose from

In the morning you can have a hearty English breakfast or just a cake and coffee duo.

There is also a seasonal daily menu available between 12.00 and 15.00. The a la carte menu includes simple bistro dishes: salads, sandwiches, soups.

TIP: For a centrally located hotel browse our list of hotels near Vörösmarty tér and hotels in downtown Budapest. You can also find plenty apartments in the centre.

Events, Festivals on the Square

Vörösmarty tér is home to several festivals and fairs all year round: