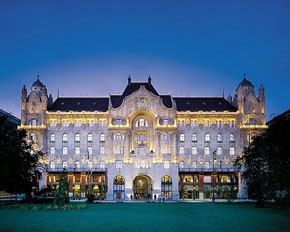 The Four Seasons Gresham Palace is one of the best luxury hotels in Budapest.

Owned by the Canadian Four Seasons group guests of this magnificent palace hotel in downtown Budapest will get exceptional high standard services while enjoying the best panoramic view a hotel has to offer.

The Art Nouveau building was restored to its original splendour and opened as a five star hotel of the Four Seasons chain in 2004.[/one_half_last]

Since its opening the Four Seasons Gresham Palace has received a couple of renowned awards like:

Four Seasons Gresham Palace stands on Széchenyi Square on the Pest side of the Danube embankment.

The location cannot be more superb offering a combination of beautiful vista of the Danube with the Chain Bridge and Castle Hill on the opposite side of the river and many key attractions in close proximity. 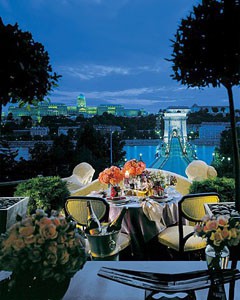 The area is in district V., which is downtown Budapest packed with

The famous Váci utca shopping street is just a few blocks from Four Seasons Gresham Palace starting on Vörösmarty Square where the Christmas Market is held in every December.

You can get to Budapest largest church St. Stephen’s Basilica in a few minutes on foot.

Should you need to use public transport to reach farther parts of the city the Deák tér metro station ( 3 metro lines of Budapest meet there) is about a 10-minute walk while the M1 underground line stops at Vörösmarty Square.

Tram 2 runs along the Danube on the Pest side and it has a stop at Széchenyi Square.

The building of the palace was commissioned by the Gresham Life Insurance Company and the construction was finished in 1906. 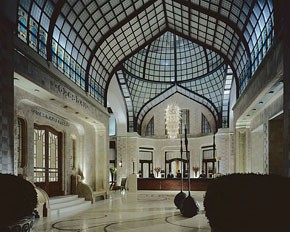 The stunning Art-Nouveau architecture of the palace was praised all over the world even then.

The most talented craftsmen were invited to work on the building.

Unfortunately bombings during World War II did a lot of damage to the building.

During the 5-year reconstruction project overseen by the Four Seasons chain much of the original architectural elements, art and decor have been beautifully restored providing elegant and refined environment for guests of the upscale hotel.

Even if you don’t stay in the Four Seasons Hotel Gresham Palace, do drop by and visit the magnificent lobby with its vaulted glass roof.

The hotel has 179 rooms including 17 suites all decorated in stylish yet modern taste providing all modern conveniences to pamper guests.

In-Room Services and Amenities Include:

All of the suites offer splendid views of the the Danube, the Chain Bridge, the Royal Palace, the Buda Hills, and the Fishermen’s Bastion. 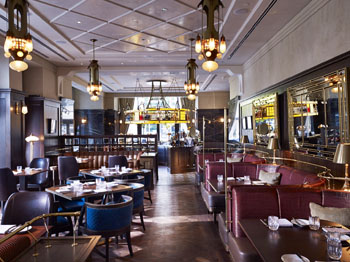 A new dining palce opened in the place of the formal Páva restaurant in summer 2015.

KOLLÁZS boasts a superb, well-thought-out Art-Deco interior evoking the ambience of the 1920-s.

Lots attention were given to every detail and only the highest quality of materials (marble from Italy, cement sheets from Marrakesh, steamed acacia wood floor by Hungarian craftsmen) were used to create a refined, understated elegance.

Despite the 5-star hotel location the bisro has a relaxed ambience and the waiting staff is kind and attentive.

KOlLÁZS is among Budapest’s premium dining places for sure.

They have breakfast menus (continental for 7 900 HUF, American for 9 700 HUF) along with specialties like goose liver and wild mushroom omelette but you can also choose a la carte.

The lunch and dinner menu represents a collage of Hungarian and international dishes. There’s also a charcoal rotisserie where grilled meat and fish dishes are prepared.

The wine list is extensive showcasing the best of Hungarian wines as well as international bottles. 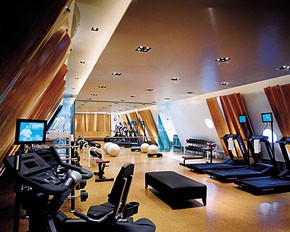 The top floor of the Gresham Palace houses modern spa allowing guests to refresh and revitalize by rejuvenating massages and treatments in 7 private rooms.

There’s also an indoor pool (39 m long) and a small whirlpool adjacent to the spa center.

Other Spa & Wellness Hotels in Budapest.

The Four Seasons Hotel Gresham Palace has a business centre on the ground floor providing services and facilities all day round that business travellers need.

The Four Seasons Gresham Palace is family friendly hotel with all kinds of services to pamper the younger ones.

Children under 18 can share their parents’ room free of charge.

For the most little ones a reliable baby sitting service (for an hourly fee) can be arranged within 6 hours upon request.

TIP: see more recommended things to do for children in Budapest. 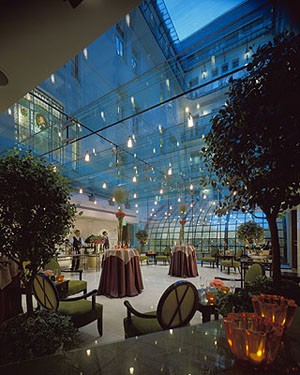 The Four Seasons Hotel Gresham Palace has a range of meeting and event rooms , 3 on the ground floor and 6 on the Mezzanine floor.

The largest and most spectacular is the so-called Télikert with its glass roof ceiling.

One of the side walls is also glass adding bright and aerial feeling.

The room has all the modern technical equipment a conference or large meeting might need.

Apart from business purposes, the meeting rooms are perfect for social events including wedding parties.

See other hotels in Budapest recommended for business travellers.

The hotel has unique events and programs in the festive season.

The whole palace is decked out in spectacular Christmas decorations and the new KOLLÁZS Brasserie & Bar prepares with special melas and menus for the Christmas period.

Celebrate the end-of-the-year holidays in style! 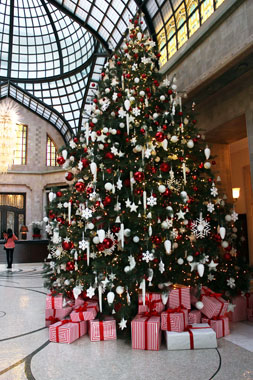 The offer excludes taxes (18% VAT and 4% Tourism Tax on room charges and 27% VAT on food and beverage charges).

Cancellation policy: rooms may be cancelled without charge until 6pm local time, 7 days prior to arrival.

A fabulous 5-course dinner will be served in the hotel’s brand new restaurant on Christmas Eve. Live gypsy music provides the tunes to the special event.

Some of the dishes:

The Fours Seasons Gresham Palace is one of the best rated hotels in Budapest.

Other Strenghts according to Travellers’ Reviews: